At around 18:30 on Thursday 14 March 2013, a car crashed into the back of a truck on Road 5 in Salfit Governorate, occupied Palestine. The driver and her 3 daughters were injured, one of them – seriously. The driver, Adva Biton, was going back to the illegal Israeli settler colony of Yakir when the accident occurred. She later claimed the accident was due to Palestinian youth throwing stones at her car. The driver of the truck, having testified immediately after the accident that he had pulled over because of a flat tyre, later changed his mind and said he had seen stones by the road.

There were no witnesses to the car accident. Nobody had seen any children or youth throwing stones that day.

In the early hours of Friday 15 March 2013, masked Israeli soldiers, some with attack dogs, stormed the village of Hares, which is close to Road 5. More than 50 soldiers broke the doors of the villagers’ houses, demanding the whereabouts of their teenage sons. Ten boys were arrested that night, blindfolded, handcuffed, and transferred to an unknown location. The families  were not informed of their sons’ alleged wrongdoings.

Two days later, a second wave of violent arrests took place. At around 3 o’clock in the morning,  the Israeli army, accompanied by the Shabak (the Israeli secret service), entered the homes of 3 Palestinian adolescents. They had a piece of paper with their names in Hebrew. After forcing all the family members into one room, taking away their phones so that they wouldn’t call for help, and interrogating them, the soldiers handcuffed their sons, all aged 16-17.

“Kiss and hug your mother goodbye,” a Shabak agent told one boy. “You may never see her again.”

A week later, Israeli army jeeps again entered the village and arrested several boys, who had just come back home from school. The soldiers lined all of them up, including a 6-year-old, and threatened at gunpoint their uncle who pleaded for the soldiers to at least release the youngest children. The army then randomly chose 3 boys, handcuffed them behind their backs, blindfolded them, and took them away. The families were not informed about either the allegations against their children, or their exact location.

In total, 19 boys from the neighbouring villages of Hares and Kifl Hares were arrested in relation to the settler car accident. None of them had previously had any history of stone-throwing. After violent interrogations, most of the minors were released, except for five, who remain in Megiddo, an Israeli adult prison.

These are the Hares Boys.

The arrested boys were subjected to a series of abuse and ill-treatment that accounts as torture. Upon detention, they were kept in solitary confinement  for up to two weeks. One boy, since released, described his cell: a windowless hole 1m wide and 2m long; there was no mattress or blanket to sleep on; toilet facilities were dirty; the six lights were kept on continuously, leading to the boy losing track of the time of the day; the food made him feel ill. The boy was denied lawyer; he was interrogated violently three times during three days, and eventually released after found not guilty at the trial.

Other boys have also told their lawyers of very similar treatment. They “confessed” of stone-throwing after being repeatedly abused in prison and during interrogations.

The five boys from Hares are charged with 20 counts of attempted murder each, apparently 1 count for every alleged stone thrown at passing cars. The Israeli military prosecution insists that the boys consciously “intended to kill”; the boys can face the maximum punishment for attempted murder: 20 years to life imprisonment.

The prosecution’s case relies on the boys’ “confessions”, which have been obtained under torture, and 61 “witnesses,” some of which claim that their cars have been damaged by stones on that same day on Road 5. The latter only appeared after the car accident got a lot of media coverage as a “terrorist act”, and the Israeli prime minister Benyamin Natanyahu announced, after the boys’ arrest, that he “caught the terrorists that did it”. Other “witnesses” include the police and the Shabak, who were not even present at that location at the time. It is not clear whether the 61 “witnesses” have been properly questioned and their claims verified with, for example, hospital admission data, or even if the alleged damage to their vehicles has been photographed or otherwise documented. Such information is not even available to the boys’ attorneys.

If the boys are convicted, this case would set a legal precedent which would allow the Israeli military to convict any Palestinian child or youngster for attempted murder in cases of stone-throwing.

The boys are now 16-17 years old. If the Israeli military get their way, the boys would only return to their homes and their families at the age of 41 – at best. Five young lives ruined with no evidence of their guilt is a spit in the face to our common principles of justice as human beings.

WHAT’S WRONG WITH THIS?

Almost every stage of this case that could go wrong, did. Local and international law has been mostly dismissed; principles of justice barely fading in the horizon; respect for human beings non-existent. 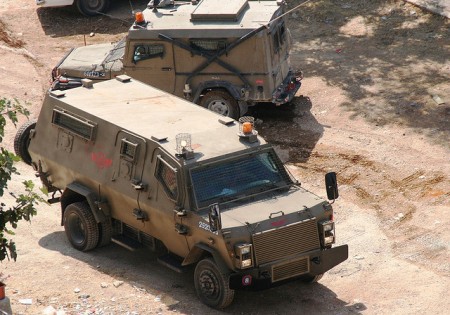 They come in these at night to arrest children 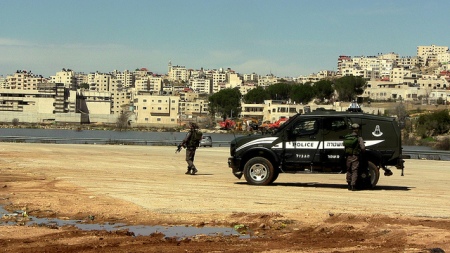 For more detailed accounts of the initial arrests and interrogations, please see IWPS Human Rights Reports from the ground:

Images used: Michael Loadenthal and angrywhitekid, both under a Creative Commons licence.